skip to main | skip to sidebar

Windy day at the beach

Painted at Energy Lab Beach Friday. The breeze turned into a strong wind and soon I was hanging on to my canvas as much as painting. Did a quick one hour block in on a square canvas, concentrating on a nice abstract shape, and then finished it up at home. Even in paradise the weather at times doesn't cooperate. This beach inspires me to very abstract work as I've done several prior ones with the big foreground. 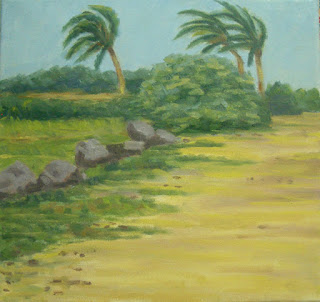 Posted by Stan Chraminski at 11:14 AM No comments:

We painted at the Keauhou store today. I had done several before and 2 or 3 sold there during their fundraiser. This one is 8x10 and a view of the store and road. With the right frame I'll take it to the store and see if they want to market it with the others still there from our group. Below also is a larger, 12x20, from Hapoepoe Beach this week. I'm thinking of going larger while outdoors, or else smaller and looser. Maybe both, a sketch and then the larger work. Stay tuned. 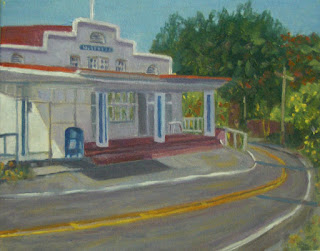 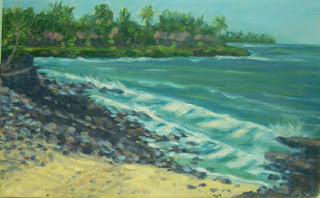 Posted by Stan Chraminski at 7:55 PM No comments:

New work from past few weeks

Been busy and lazy lately both. Training for a half marathon next week has left me tired so put off touchups and photoedits for a while.  Below is recent work from outdoor sessions.

This top one is Hookena Beach, and one of my favorites lately as I feel I captured the landscape and the activity on the beach both. 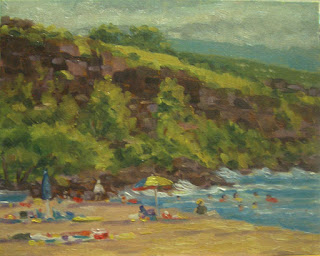 Below is the path at Kaloko Ponds, 12x12. Still not quite the feel of the light coming through the trees and will have to try a similar scene again. 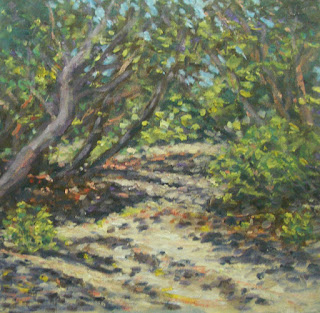 This scene is from Honl's Beach where I added the two figures at the end to try and show the scale of the rocks. Figures might need to be slightly larger but it works OK for me
. 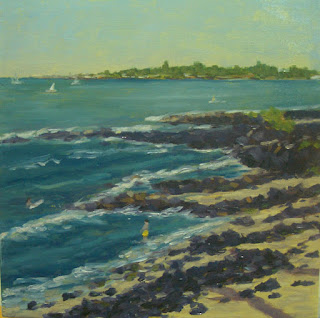 This is another path scene at Manini Beach where I tried the light through the trees again and one of these days I'll capture it the way I want. 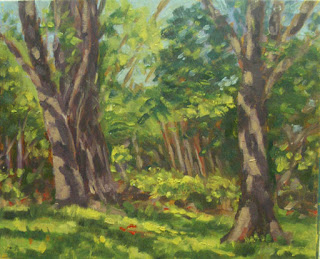 This was the second Manini Beach done the same day. Once I pushed the far mountain back by fading it out a little the scene works. 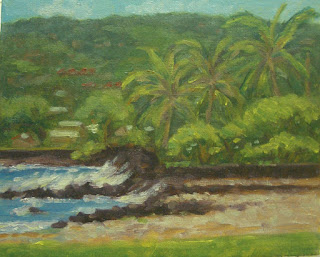 This week's Honokohau Harbor mouth park scene. Needed quite a bit of work at home as I deleted some rocks showing through the palm tree to emphasize the tree itself and it works better now. I rarely do a single tree like this but good to do a "portrait" once in a while. I also reworked it to show overlap of the palm leaves to make it more three dimensional. 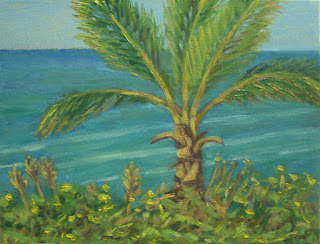 Posted by Stan Chraminski at 2:26 PM No comments:

Stan Chraminski
I'm now based in Kailua Kona on the Big Island of Hawaii and have continued my business called Albion Arts. My Website at www.artbigisland.com shows my various types of work.